"Before you can search for truth, you must be interested in finding it." -Miroslav Volf

On thunderstorms, love, and chopsticks

Note the pics in the previous post. Today I finally hit the town, no longer under “house arrest.” I was able to go the bank, buy a phone, get groceries, and a gain better sense of the layout of Xiaogan. It’s fascinating to watch people stare in curiosity as we walk by. It’s rare in this city to see foreigners; Will and I definitely stand out. And they don’t seem to be mocking or judging when they stare…just sincere curiosity.

The slow pace of the past few days has been nice, and yielded some special, simple moments. There was the thunderstorm of a couple days ago, without a doubt the most spectacular thunderstorm I’ve witnessed. I see now that living in the NW U.S., I’ve not known a true thunderstorm. I watched what were nearly continual flashes of light accompanied by thunder. It was evident in those several hours how alive nature truly is—untamed, uninhibited, indifferent to the buzz of creatures roaming the planet, creatures often more concerned with nature’s utility than with its sheer glory and power and life.

Will and I had a rich discussion the other night, dialoguing about African tribal religions, faith and skepticism, theology, what practically loving our students might look like, among other matters. He and I are not so different, all things considered.

The love question will continue to be at the forefront of my mind. I feel like of all the many reasons I am here, demonstrating an otherworldly love for the people I meet is of primary importance. And the more I say that, or hear others say it—“we’re called to love” or “I just want to love them,” etc…I realize how flippantly I (and others) throw that around. I don't want to reduce love to be about simply my feelings toward people, nor to merely about sharing my notions of Truth. Nor do I want to let myself love people only in ways that are convenient for me.

I’m not sure a feeling of deep appreciation for someone counts as love, at least not the kind of love I’m called to. That kind of love involves the practical—adjusting my own plans for others’ sakes, respecting others souls through intentional listening and seeking understanding, going the extra mile, validating and affirming with verbal praise, making tangible sacrifices for others’ benefit, giving voice to the voiceless, including the traditionally excluded…to name a few. Love is often inconvenient.

And I also don’t think I best love someone by telling them what I believe—even though I believe in Love above all else. I think most people know better than to buy into an idea separated from practice; they want what works. In other words, I believe people will better know the Love that compels me if they experience it through me than if I have to explain it as a Truth that (theoretically) informs my life.

But that of course means I need to actually do at least a decent job of loving people…which takes effort, a willingness to fail at it and continue trying, growing daily in my ability to love in practical ways and in the character and spirit necessary to produce that kind of practical love. That’s hard work; but it’s also part of "the deal," I think. Anything less cheapens the grace I've received.

As the pictures indicate, I’ve made a few new friends. Ruth, at the dinner table, patiently spent much of dinner attempting to teach me proper form for holding chopsticks. I’ve got a long ways to go. And David Beckham (he likes soccer), in our “posed candid” photo, was amazing today. He is one of my students, and speaks English well enough to translate. He is so generous and kind, eager to help and eager to spend time with me. Yet this kindness his not unique, but reflects what seems to be the norm here at school—a general friendliness among people I’m not sure I’ve ever experienced on such a large scale. It’s really pretty beautiful.

My first class is tomorrow (Tuesday). I’m teaching an Oral English class for sophomores, and a computer class as well—actually teaching typing, word processing, etc., for students who’ve not used the English versions of these things. That should be interesting. The rest of my classes do not start until late September, when the freshman arrive (freshman spend the first few weeks of school doing military training)…so I have some time to ease in. I got to see my primary classroom today and also met some of the administration at the school.

Off to prep for tomorrow’s class and then play pool with some students! And maybe squeeze in a nap too. :)
Posted by Matt Boswell at 1:00 PM 2 comments:

Will, David (one of my students), and I hit the town. 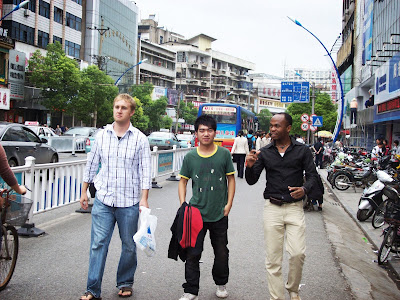 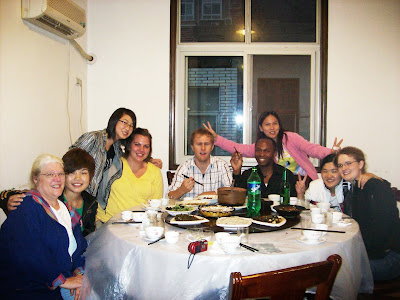 Note the pics in the post below. As you can tell, I’ve been freed from my apartment to some extent. I am still hanging out at my place most of the day, but have taken a few minor excursions out. Being low-key about it. :)

Met a few more people too. A couple students, Jo and Ellie, who are friends with Will and Miriam (one of the girls I came with from NWYM) came over and chatted at our place for a while, which was nice. People’s schedules are so much more laid back here. Someone might say they’ll meet you at 2pm and they will arrive at 4pm. People who value promptness and scheduled plans might go crazy here. It seems it’s important to be flexible, spontaneous, and maybe most importantly, willing to be fully present in a given setting. The people I’ve met love to chat, get to know each other, practice their English with foreign teachers like myself, and are in no rush to leave. Everyone is so friendly and without overwhelming agendas that require them to hop from event to event in a tightly packed daily schedule. Living here exposes how fast-paced I normally live, at least relative to the locals I've met. I continue to be challenged to savor and be present in every experience and interaction rather than be restless waiting for something new.

Also met Will’s friend Overjoy, and went to his office to play ping-pong. Notice how drenched I am in the pic of Will and I. It is HOT and also very humid…playing ping-pong definitely brings out the sweat. Overjoy (his English name) met Will through “English Corner,” a casual café-like setting on campus where anyone can come (students or locals) and practice their English with teachers. People here love to practice their English, and this teacher-student relationship very naturally seems to lead to friendships, as is the case with Will and Overjoy.

Ping-pong was fun…I thought I was holding my own for a while, until I realized Overjoy was being generous with me to make it competitive. He’s much better than me. :)

That’s about the extent of my activity and interaction, given the situation. Finished “The Alchemist”—brilliant. Also got some curriculum materials, so I’m beginning to read through this and prepare for classes a bit. Also running stairs to stay active; I live on the sixth floor, no elevator.
Posted by Matt Boswell at 8:15 PM 3 comments: 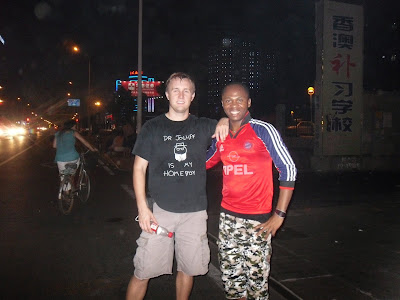 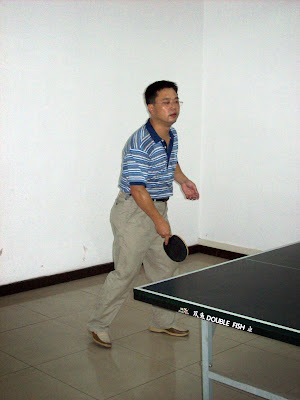 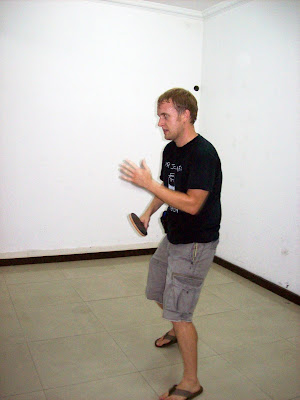 Me, getting destroyed, as I should have anticipated. 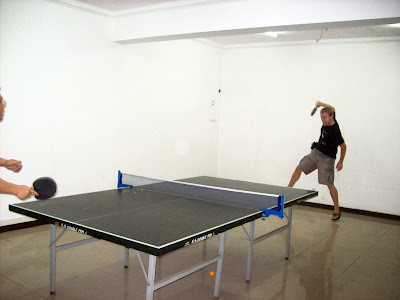 In China (sort of)

Ni hao (hello) from China. It’s Tuesday afternoon here (15 hrs ahead of Pacific time). I arrived late Sunday night after about 24 hrs of continuous daylight, thanks to a long flight and the crossing of several time zones. And since I have arrived in Xiaogan, I have not left my apartment. The university at which my team—myself and three others sent by the NWYM—will be working is required to quarantine us for one week, as a caution to protect the country from the Swine flu. Yep. Until further notice, we are stuck in our apartments for a few more days. Hence—I’m “sort of” in China; I’ve yet to explore and meet anyone other than my roommate.

There are some benefits to this. (Here comes a little “Bositivity”…props to Ron and Joann for the term). It is awfully hot and humid outside, and I have AC in my room. I also have had a good time getting acquainted with my apartment mate for the year—Will, a fellow ESL teacher from Cameroon. He has been informative about what to expect from the Chinese people—one thing being friendliness. This confirms what I’ve already heard: the people here, whether I meet them in the classroom or buy shoes from them, will be incredibly intentional in befriending me. It’s exciting to think about the possibilities for dialogue in a culture where everyone is as eager as me (if not more) to know and understand me. I am chomping at the bit to be “liberated” from my apartment and meet these wonderful people!

Will is very obviously going to be a great roommate. He is thoughtful, generous, and easygoing. Today he made us lunch—Cameroon style—while we discussed the culture and political situation in Cameroon (very intriguing) as well as foreign sentiments toward the U.S. I’m already energized by what I am learning by being here, and I’ve hardly met anyone.

Also been a good time to read and relax before the busyness of teaching and socializing begins in the next several weeks. I’m working through three books. The most rewarding has been "The Alchemist" (Paulo Coelho), a timely read for me in many ways. It is a “journey” novel about a Spanish shepherd boy traveling across Northern Africa to find what he calls his “personal legend." It is a neat take on the search for purpose, written from an inclusive religious perspective. I like the stress on how one’s search for purpose is not merely personal, but corporate. I like to think that searching for our “legend” is something others need from us; that the more a person lives out their passion/purpose, the greater contribution they make to the whole human community. Thus our quest for our “personal legend” is not necessarily narcissistic, but is an act of love. It is a recognition that meaning is found not in isolation from others but through relationships and through offering our lives to others. Our personal legend is our unique offering to the human community.

Enough on that. I’m also reading "The Great Awakening," Jim Wallis’ latest visionary book about faith and politics (recommended!), and a book about Chinese culture. Plenty of time to read while trapped. :)

All for now…will update more once I actually start to meet people.
Posted by Matt Boswell at 12:29 AM 7 comments: 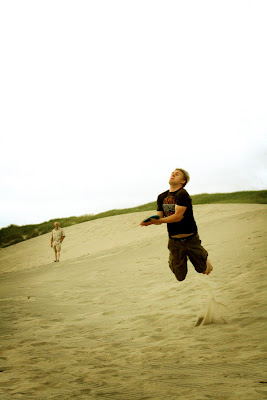 A memorable summer winds down.
Posted by Matt Boswell at 1:36 PM 4 comments:

Matt Boswell
I am a second-year PhD student in the area of Christian Spirituality at the Graduate Theological Union in Berkeley, CA, studying theology, spiritual formation, ethics, and interfaith dialogue. Aside from reading and smelling my new books, I also enjoy running, Mariners baseball, coffee, scented candles, making up silly raps, my wife of over three years, Joann, and my one-year-old daughter, Clara.

On the Lighter Side